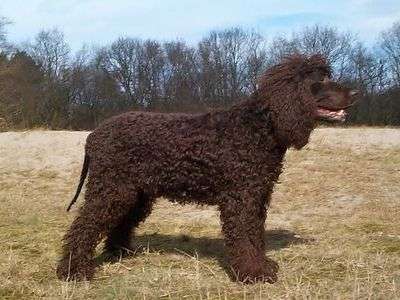 Frequently abbreviated as AWS, the American Water Spaniel is a popular breed of dog for families throughout the United States, Europe and many other parts of the world. This type of spaniel is slightly larger than similar breeds and its double-thick coat allows it to be quite comfortable during the colder months of the year. Coming in a variety of shades of brown, this dog is ideal for living in smaller places due to an easygoing temperament and its ability to get along relatively well with other animals.

As the name hints, the American Water Spaniel was developed during the nineteenth century along both the Fox and the Wolf rivers that are located in the state of Wisconsin. Their breeding occurred from the need of local hunter to have a dog that was quite adept at hunting on land as well as in water. This dog was also required to be of a diminutive size so that it could be transported easily across great distances while remaining warm in the frigid temperatures of the cold American north.

The American Water Spaniel is thought to be a combination of a number of breeds including the English and Irish Water Spaniel, the Poodle and the Curly-Coated Retriever. The mix has allowed for a rather even disposition. Soon after its introduction as a hunting dog, this variety became popular with average homeowners throughout the country.

While it was previously mentioned that this animal works quite well within families, it has the unique aspect of being a "one-person" dog; it usually makes a strong bond with a single family member. Owing to its hunting background, this spaniel is extremely agile and takes well to water almost immediately. Still, it should be noted that it can also be an independent animal. This can make training difficult if not performed at an early age. These dogs can be extremely protective over children and if they are in distress or otherwise upset, they are frequently quite vocal.

As they can be quite competitive with other spaniels of the same breed, any aggressive behaviour should be dealt with at an early age. If not, these habits can be harder to break later in their life. Some of the best forms of training include physical activities that are not static in nature (these likely mimic the hunting atmospheres that they were adapted for). The owner should be patient with the animal, as they can be a bit slow to develop into mental maturity.

Playing games and performing tasks which involve skill such as flyball are excellent ways to condition the animal while helping it to maintain a healthy weight. Due to its thick coat, this spaniel should be brushed regularly. During the months of summer, it is important to monitor for heat stroke and it should be provided with plenty of excess water alongside a shady location to rest.

Thanks to pack breeding, genetic illnesses that are present in other types of spaniel are not as prevalent in the AWS. Still, there are some common ailments that can occur later in life. These can include cataracts and other eye conditions. These should be checked as early as one year of age (they are hereditary). Other ailments can include hypertension, hip dysplasia and hypothyroidism.

The American Water Spaniel is an excellent family-oriented dog and will make a perfect addition to most homes. By providing the animal with a stimulating environment and plenty of exercise, it will frequently enjoy a lifespan of between ten and fifteen years.