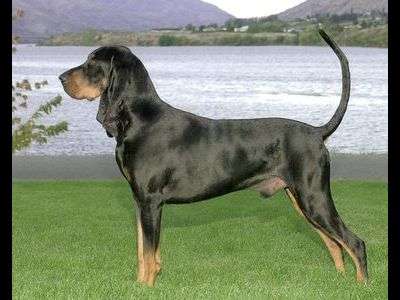 The Black and Tan Coonhound originates from the United States where it was bred as a cross between American and English Foxhounds, the Bloodhound and the Irish Kerry Beagle. The Black and Tan Coonhound is also believed to have some genes of different hunting dogs from France and Germany. Its name comes from its original purpose as a specific dog for coonhunting, an old American hunting technique and popular sport amongst the settlers in the 17th and 18th century. Coonhunting involves the catching of opossums and racoons. The hunters needed an easily trainable dog with an excellent sense of smell that would give a loud howl when having brought quarry to bay. The Black and Tan Coonhound grew extremely popular in a very short space of time, even the US-president George Washington having had four of these quintessentially American dogs.
The development of the breed can be traced back to a group of professional scouts around Simon Kenton who lived in the Ohio Valley and were responsible for breeding the so-called „Old Glory line“. In the United States these Old Glory Black and Tan Coonhounds were bred until the 1940s. Even today the Black and Tan Coonhound remains a very popular breed in certain parts of the US, whereas in Europe it is still relatively unknown.

Compared to its direct ancestors, the Bloodhounds, the Black and Tan Coonhound is much smaller. It is of a slim, but strong and well-proportioned build and has lean and muscular limbs. The Black and Tan Coonhound can reach a shoulder height of up to 69 centimetres and can weigh up to 34 kilos, the males being much bigger and heavier than the females. The breed’s most distinctive feature are the long, low set ears and the round, hazel-coloured eyes that give a gentle and friendly expression. Its coat is perfect for protecting this dog when it hunts through the bushes. It sits on loosley fitted skin, is dense and short, of a rich and highly shiny black colour and, as the name of the dog suggests, bears tan-coloured markings above the eyebrows, on the chest, the legs and the mussle.

The Black and Tan Coonhound is an excellent hunter and an obedient, easily trainable companion. It is of a gentle and loving nature and capable of building a strong relationship with humans, including little children. A Black and Tan Coonhound will always be devoted to its owners and very protective of them, while distant to strangers. Its independent mind however can make it very stubborn at times, especially when out and about in the open countryside. Once it has detected a scent or track, it is very difficult to hold it back from running off. If consistently trained and socialised from an early age by a dominant owner, ideally from being a puppy, it will be loyal, and will develop into a talented guard dog as well as a peaceful and calm member of the family.

The Black and Tan Coonhound was bred as a working companion who is used to always being around its owner. That’s why it should only be kept by somebody who can invest a lot of time in different leisure activities. If left on its own for too long, a Black and Tan Coonhound will suffer from seperation anxiety. Long walks and regular exercise are vital for its well-balanced nature and wellbeing. It is therefore not suitable for a life in a city apartment, but should be kept in a house with a big garden, where it can run around and enjoy some freedom. The loud barking could be an annoynace to next door neighbours. The long ears require a lot of attention and should be cleaned on a regular basis to prevent the dog from developing ear infections.