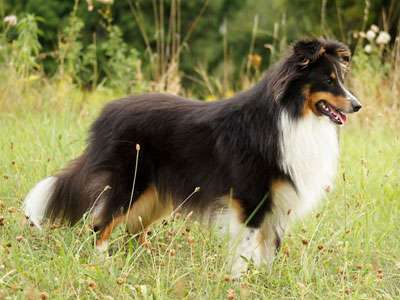 The Shetland sheep dog, or "sheltie" as it is commonly called, traces it's roots back to Shetland where the breed was originally developed to herd the land's small statured sheep. The modern Shetland sheepdog is a result of mixed breeding with the rough collie, the now extinct Greenland Yakki, the King Charles Spaniel (not the Cavalier), the Pomeranian, and finally the border collie. This is a divergence from their origins where they were likely closer to a spitz type dog, similar to the modern Icelandic sheepdog and indeed the two breeds do bear some resemblance. The breed was originally called Shetland collies, but this aggravated rough collie breeders and the name was changed to Shetland sheepdogs. The breed was officially recognized by the English Kennel club in 1909 and the American Kennel club some years later in 1911.

The Shetland sheep dog looks like a miniature version of the rough collie, ranging in sizes from small to medium. Height ranges from 13-16 inches and they may weigh up to 27 pounds. Their double coat has long, weather resistant guard hairs over an undercoat designed to moderate temperature in all degrees, keeping the sheltie cooler in the summer and warm in the winter. Hair length is shorter around the head and muzzle but forms a mane about the ruff of the neck. The color of the coat generally falls into three categories: sable, tri-color and blue merle. sable is by far the most common, with golden the primary color supplemented by varying degrees of white markings. Tri-color refers to an coloring that encompasses black, white and tan. Blue merles are essentially a black dog with some white and tan markings. Eye color is usually dark brown, except in blue merles where they may have one or two blue eyes.

Shetland sheep dogs are loyal, social, energetic and very intelligent. They love people and need to be socialized in order for them to happiest. Being very intelligent and trainable, it is a good idea to give them a job to do or else they may become bored. Like other dogs bred for herding, they excel at dog games like agility, Frisbee and competition obedience. being of such a good nature and being outwardly very pretty goods, Shelties have become favourable companion dogs. It would be a mistake to let a sheltie run unchecked in the house, however, and they require a firm hand to keep behavior problems from developing. Shelties are sound sensitive and will listen for the tone in your voice, knowing whether you mean what you say or not. Firm leadership from the owner and daily walks / activities are necessary to dissipate pent-up mental and physical energy.

The Shetland sheepdog lives about 12-15 years. They are prone to suffering eye problems when advancing in years. Other common health problems with the breed are: hypothyroidism, displacement of the patella, epilepsy and hip dysplasia. while the double coat of a sheltie looks daunting, it is surprising easy to care for. Frequent grooming is required to keep the coat in good repair and keep matts in the hair from forming. A sheltie is seasonal shedder and will shed their undercoat twice a year; once in the fall and once in the spring. Otherwise, shelties are quite clean, often going out of their way to keep clean.