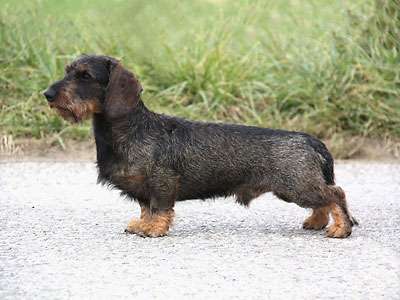 The American Kennel Club recognises two sizes of Dachshund; Standard and Miniature. In Europe, a Toy variety known as a kaninchen, which means rabbit in German, is also recognised. The breed is unofficially named tweenie when its size falls between standard and miniature.

The Dachshund was developed in Germany in the 17th century and was bred to hunt small game like badgers and rabbits. Dachs is the German word for badger and the Dachshund’s small legs allows it to hunt and follow animals into burrows where it can fight with the prey and kill it. A smaller variation was breed to hunt stoats and this breed is fearless and has also been known to fight otters and foxes. Although the number of Dachshunds decreased during World War I, a large number of dogs were imported to the USA from Germany to increase the gene pool and the breed was recognised by the American Kennel Club in 1885.

The three types of Dachshunds are wirehaired, shorthaired and longhaired and each of these types has a slightly different size. However, with all variation the body is longer than it is tall and is muscular with short legs. The head is elongated with a slightly convex and arched skull that features protruding eyebrows. The breed has a long muzzle as well as a robust jaw and teeth that meet in a scissors bite. The eyes are almond-shaped and are either dark brown or dark red, while the ears are mobile and hang long. While the coat is shiny and sleek, it comes in a wide range of different colours including solid black, red, brown, tan or cream, patterns or colours and patches of colour, especially on the feet and chest.

This courageous dog displays many terrier-like characteristics and is curious, clever and very lively. The Dachshund forms a string bond with humans and is very loyal and affectionate. Housebreaking and training this breed can be slightly difficult and must be completed at an early age to prevent behavioural problems from developing such as separation anxiety and guarding food, furniture and toys. The Dachshund should not be handled roughly and is better suited to older children than young children.

The Dachshund is prone to certain spinal problems known as Dachshund paralysis as well as heart disease, mast cell tumours, urinary tract problems and diabetes, Dachshunds can become overweight and lazy easily, so it is important to pay special attention to their diet, as their back will become strained if they gain too much weight.

The Dachshund adapts well to living in an apartment and because it is fairly active indoors it does not need a garden to run around in.

This active breed has a lot of stamina and needs to be walked ever day. While Dachshunds love to play, excess jumping can damage their spines and care should be taken when walking then in crowded areas so that they are not stepped on. Longhaired Dachshunds require daily brushing and combing, while the wirehaired variation should be professionally trimmed twice a year and the shorthaired Dachshund simply needs to be rubbed with a damp cloth from time to time.