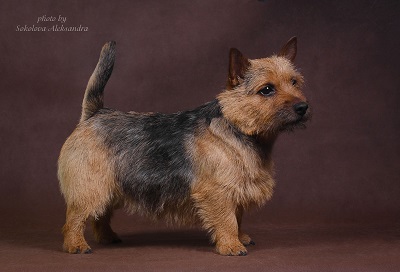 The Norwich Terrier breed is one of the more recently developed dog breeds, closely related to the Norfolk Terrier. Until 1964, the pricked ear of the Norwich Terrier and the dropped ear of the Norfolk variety were not considered distinctive enough to separate the two breeds, but from then on, a formal distinction was made thanks to the British Kennel Club. The breed originated in England from the Trumpington terrier branch, and was quickly mixed with Glen of Imaal genes. They were occasionally called Jones terriers, after the name of the man who helped develop the bread and spread it in the USA, where Norwich terriers were used alongside foxhounds to hunt.

An affectionate dog, the Norwich Terrier can get along splendidly with pets and other children in large households. He’s quick to signal intruders and he has very good reflexes. He takes great joy in spending time with the family, especially in the open air. As they are small and lovable, they tend to be mollycoddled, which can only lead to behavioural problems. He’s extremely playful, but likes to play in groups rather than alone.
Norwich Terriers thrive when they are socialised at a very early age, and a puppy nursery is a great idea for anyone interested in offering the dogs an environment that can help them develop into well-rounded individuals. What the dog lacks in size and weight, he makes up for splendidly in character. This is a spunky dog that needs an active owner. They are happy when they are given tasks, much like their ancestors would have been, and love taking part in sports competitions and attending obedience classes. They will instinctively chase squirrels and other small animals, practice their digging skills and bark purely for entertainment, which is why they should be restrained in public. They are known as peaceful animals that enjoy human companionship, but owners should be prepared to cope with their prey drive and their often underestimated athleticism.

Norwich Terrier stand roughly 10 inches tall at the shoulders and weigh around 12 pounds, both males and females. They are some of the smallest terriers ever bred, agile and small enough to flush foxes out of their dens.
A hard, straight topcoat covers their downy undercoat. Though they have long hair on their face, neck and shoulders, the rest of the body, the ears and the muzzle are covered in short hair. The coat can be fawn, tan, grizzle, black, or a mixture of these. A weekly brushing to remove dead hairs will more than suffice.

As an intelligent working dog, the Norwich Terrier is happiest when he is given tasks. He requires daily exercise and he must be restrained because his instincts can cause him to run in front of moving cars. Though not the most quiet breed of dog, he may be kept in apartments without giving the neighbours too much trouble if his needs are met.
They say Norwich Terriers will eat anything that doesn't eat them first, and so it is imperative that they are exercised and fed accordingly. To check if they are overweight, a simple eye test or hands-on test will do.
Unfortunately, they are genetically prone to a few conditions, which doesn't necessarily mean that they will develop them, however, given the proper care. One condition is tracheal collapse, typical of small breeds, where the tracheal rings obstruct the airways, causing dogs to cough with a honking sound and faint. The condition is generally treated with antibiotics, and doctors may recommend replacing the dog lead and collar with a harness. The second condition is elongated soft palate, where the soft tissue that serves as a ceiling to the mouth expands, obstructing the airways and requiring surgical removal. They can also suffer from epilepsy, which is incurable, but manageable with appropriate treatment.