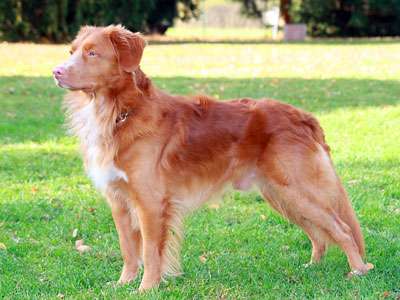 This breed is becoming increasingly popular among home owners for its great temperament and easy care.

The Nova Scotia Duck Tolling Retriever hails from the Nova Scotia region of Canada and is believed to be a cross between a working spaniel and a retriever. The breed was developed in order to lure ducks and was specially created by Canadian duck hunters. This breed was formerly known as the Yarmouth Toller or the Little River Duck Dog, although the name was changed in the 1950s when it was registered by the Canadian Kennel Club. The Nova Scotia Duck Tolling Retriever was later recognised by the American Kennel Club in 2003.

This breed resembled a small version of a Golden Retriever and features well-muscled legs that are rather heavily boned. The Nova Scotia Duck Trolling Retriever has a deep chest that is specially insulated to allow it to swim in cold water. The triangular ears are set high on the head, which is slightly wedge shaped. The dense coat comes in a wide range of different shades from orange to red, while there are often white markings on the chest, feet, tip of the tail and face.

This sensible breed is very devoted to the family and is intelligent and easy to obedience train. The Nova Scotia Duck Tolling Retriever is very good with children and will easy form a bond with a child so that it becomes the child’s constant companion. The breed is very patient with children and is not snappish, which makes them ideal for young children to play and grow up with. Although the breed has a tendency to be reserved around strangers, this can be controlled through early and thorough socialisation. This breed was developed as a working dog and likes to work hard, which means that it can become bored if it does not receive regular attention and care. The Nova Scotia Duck Tolling Retriever is loyal and protective of its family and will bark to sound the alarm if strangers approach, although at other times it is not a particularly vocal dog. This dog enjoys cooler temperatures and care should be taken in the summer months so that it does not become overheated. Listlessness and refusing to eat are clear indications of overheating and should be dealt with immediately to prevent other health conditions from developing.

This is generally a very healthy breed, although its limited gene pool can result in certain health concerns such as thyroid, retinal atrophy and autoimmune problems.

This breed does particularly well in cold climates and can live outside, although it is also suitable for apartment life as long as it gets plenty of exercise.

The Nova Scotia Duck Tolling Retriever has lots of energy and needs plenty of physical exercise in the form of a daily run. It also loves to swim and play ball games as well as retrieving. The breed features a water repellent double coat that needs to be regularly brushed and combed with a firm bristled brush and particular attention should be paid to the breed’s dense undercoat. Bathing should only be done when absolutely necessary, as this will remove the water resistant oils in the skin. Instead, treatment with a dry shampoo is preferred.