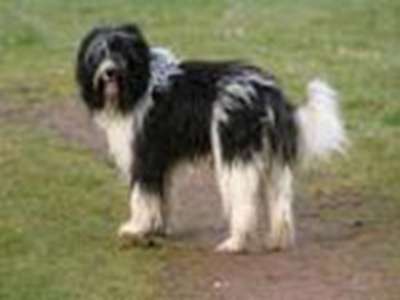 You might be forgiven for never having heard of the Dutch Schapendoes, as it's not a very common breed. In fact, during World War II it almost died out completely, but a careful breeding programme saved the day and the Schapendoes is now becoming an increasingly popular breed to own. With a somewhat mixed lineage that includes the Old English Sheepdog and the Bearded Collie, the Schapendoes is a mid-sized breed, originally bred as a sheepdog and known for its agility and superb jumping prowess.

The Schapendoes' average height is around 50cm (20 inches), although bitches are generally a little smaller at about 45cms (18 inches). Weight is usually about 20kgs (44lbs). It is a lightly built breed, allowing for its purpose as a herding dog, and it should demonstrate and easy springy gait. Its skull is almost flat, with the bridge of the nose placed slightly below the skull line and with a well-defined muzzle. The eyes should be brown and the whites should only be seen when the dog is looking sideways. Its body is slightly elongated, with a refined air to its overall demeanour, as well as a deep chest and powerful hindquarters. The tail, which is used as a rudder during jumping, should be held high and straight.

The defining characteristic of the Schapendoes is its shaggy coat, which can grow up to 7cms long, especially on the rear of the dog. The hair should have a dry texture, rather than smooth, silky or frizzy. A dense under-layer serves as waterproofing. The jaunty facial hair, with its long fringe, beard and moustache, gives the breed its iconic look. The Schapendoes can be any colour, but blue-grey and black are the preferred colours for the show ring.

The Schapendoes is considered one of the most loyal and intelligent of the breeds, with a strong sense of commitment to its owners which makes it especially suitable as a family pet. It has a lively personality and is extremely friendly, although this perhaps makes it less suitable as a guard dog. It loves playing, but can occasionally become a little high spirited if not managed well.

Because this is a working breed, the Schapendoes must be exercised regularly, needing at least an hour a day. It must also have plenty of stimulation, such as play sessions with its owner; this breed does not do well if left alone for long periods.

Naturally, its coat requires a good deal of attention and should be thoroughly brushed each day. Regular bathing also helps to keep the coat in good condition, although it's important to ensure the hair is dried very well in cold weather.

Establishing a weekly healthcare routine will identify any issues as soon as they occur and enable swift treatment. The eyes are rather vulnerable with this breed, because the hair falls down over them and can mask any symptoms of infection or other problems. It's also very important to clean the ears regularly to avoid painful ear infections.

There is a low rate of inherited conditions reported with the Schapendoes. However, responsible breeders should check for hip and elbow dysplasia, and other potential problems include: atopic allergies, masticatory myositis, pannus, cryptorchidism, and inflammatory bowel disease.

The Schapendoes can also be prone to goniodysplasia, in which the eye fluid does not flow correctly, which can lead to blindness. Affected parents may not necessarily pass goniodysplasia on to their offspring, but puppies should be tested to identify whether or not they have the condition.